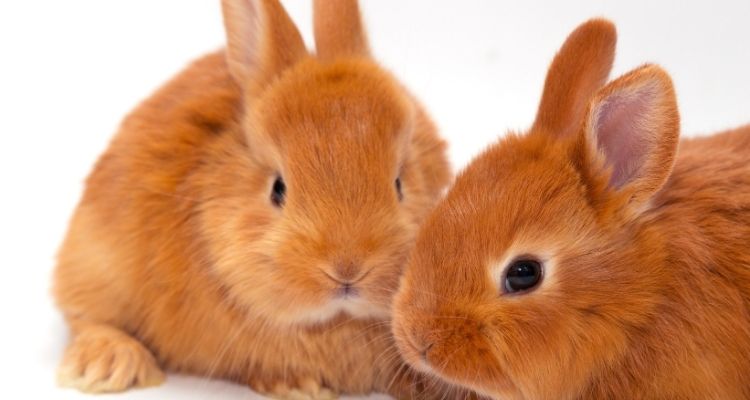 Chinchillas, guinea pigs, hamsters and gerbils are all members of the rodent family. When you consider the characteristics of rabbits such as being herbivores, covered in fur, prey animals, same chewing motion, you may naturally think that rabbits are rodents as well.

Rabbits do not belong to the rodent family. What differentiates rabbits from other small mammals such as guinea pigs and chinchillas is the anatomy of their jaw and teeth.

Rodents have two teeth (called incisors) on both their upper jaw and lower jaw.

Rabbits have four teeth in their upper jaw and two teeth (also called incisors) in their lower jaw. Behind a rabbits top incisors are a smaller set of teeth which are thought to help rabbits eat grasses and vegetation easier. Rabbits incisors are also white. In contrast, rodents incisors have an orange tint.

Rabbits are strictly herbivores. Rodents also dine on plant materials, however this can be more varied than rabbits. Rodents for instance, can eat grains, seeds, plant roots etc. whereas rabbits eat vegetation, preferring fresh leafy greens as well as grass as their staple diet.

Similarities Between Rabbits and Rodents

The latin word “rodere” means “to gnaw” which is one of the reasons rabbits are often confused as rodents.

Like rodents such as mice, rats and guinea pigs, rabbits teeth are continually growing. They must gnaw to wear their teeth down.

According to Encyclopedia Britannica, there are more than 2050 species of rodent mammals that have upper and lower incisor teeth that continually grow. As rabbits gnaw also, and need to because of their evergrowing incisors, it is common to think that rabbits are part of these rodent species.

Differences Between Rabbits and Rodents

As rabbits are herbivores, meaning they eat leafy plants only, their digestive system differs from a rodent. Rabbits break down and absorb their food in a similar fashion to sheep, cows and other ruminent animals.

Inside the digestive system of a rabbit there is a pouch which holds bacteria largely beneficial to a rabbits health. This pouch is called the cecum, a latin word for blind pouch.

As a rabbit eats, some plant fibers are more easily digested than others. The bacteria in the cecum helps to break down more tougher plant cellulose and ferment this. The result is a soft, black rabbit poop called cecotroph.

You may not ever notice this, as your rabbit will then eat the caecotroph again. As it is already partially broken down it is much more easily digested the second time around and nutrients are absorbed and digested by the rabbit. The result is the smaller, harder more pellet like rabbit droppings you may be more used to seeing.

There are only a few rodent species that also have cecums. Guinea pigs and chinchilla’s are two. For the most part, the lack of cecum in rodents is a differentiating factor between rodents and rabbits.

Rodents may also consume a partial meat diet. This is another distinguishing factor between rabbits and rodents, as rabbits are strictly plant eaters only. This isn’t a strict detail, as guinea pigs are also plant eaters yet fall into the rodent category.

Rabbits also have hairy feet with powerful back legs that allow them to jump and kick. This is vastly different to the structure of most animals in the rodent family.

Jackrabbits belong to the same family as hares – the Lepus family. Hares have longer ears, are larger than rabbits and have larger hind legs.

Hares and rabbits can often be confused, because to the untrained eye they look very similar.

The five species of Jackrabbits however, are like rabbits, not rodents.

Are Rabbits Rodents or Marsupials?

Rabbits are neither rodents or marsupials. They are mammals who grow their young internally until giving birth to a fully formed rabbit (known as a kitten), including a placenta. This placenta nourishes the young during the internal development phase.

Marsupials are also mammals, however their babies are born partially developed. The placenta of a marsupial lasts only a few days. Marsupials then carry their young in a pouch where they are nourished by their mother’s teats until they are old enough to survive on their own.

Are Rabbits and Rodents Related?

Whilst Lagomorphs are related to rodents, it is like comparing yourself to your 10th distant cousin. There’s a slither of genetic connection that makes them distantly related. As species have continually evolved over the years, rabbits are now firmly in their own order, along with other lagomorphs such as pikas and hares.

The distinction to separate rabbits and rodents was made in 1912 after paleontologists established the clear differences with their teeth structure, color, the bushiness of their coats and reproductive anatomy in male rabbits.

Affiliate Disclaimer: As an Amazon Associate, I earn from qualifying purchases.